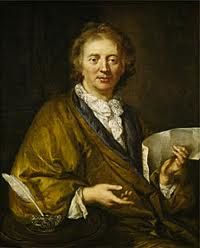 François Couperin (1668 - 1733) was born, lived and died in Paris and was perhaps the greatest French Baroque composer. The Couperins were a musical dynasty whose members held the position of organiste titulaire of Saint Gervais, Paris, for nearly two centuries. François' compositional talent, inprovising skills, and unparallelled virtuosity on the organ and harpsichord earned him the nickname 'Couperin le Grand'.

Having been first taught by his father Charles, François in 1685 became organist at Saint Gervais. and in 1717, resident organist and composer at the court of King Louis XIV, the 'sun king'. In this position he organized weekly concerts, typically featuring of suites for violin, viol, oboe, bassoon, and harpsichord.

Apart from the chamber music performed in the weekly concerts, Couperin composed masses as well as sacred and secular vocal music. His greatest contribution to music, however, are his four volumes of harpsichord music, which contain over 230 individual pieces, and have influenced composers as divers as J.S.Bach, Johannes Brahms, Richard Strauss, and Maurice Ravel (the latter honouring him with his suite Le Tombeau de Couperin). Many of these pieces have evocative picturesque titles and express various moods through innovative use of key signatures, harmonies, and discords. Only one collection of organ music by Couperin survives, the 'Pièces d'orgue consistantes en deux Messes'.

Couperin introduced the Italian trio sonata form to France, and duly acknowledged his debt to Arcangelo Corelli by naming his greatest trio sonata 'l'Apothéose de Corelli'. He successfully blended the Italian and French styles in a set of pieces he gave the title Les Goûts Réunis (The United Tastes).