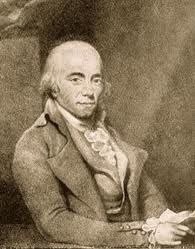 Muzio Clementi was born in Rome in 1752, the son of a Roman silversmith and a Swiss mother, the eldest of seven children. His father recognized his musial talent at an early age, and the boy was taught the basics of music by the local church choirmaster Buroni. At age seven, he started organ lessons with Cordicelli, and he made progress so fast that after some years he obtained a position as church organist.

In 1766, when he had already shown considerable talent as a composer, he was taken to England by the wealthy Englishman Sir Peter Beckford, who provided for Clementi's lodging and musical education in return for musical entertainment at his estate in Dorset. It was here that Clementi learned to play the harpsichord. In 1770 he made his public debut as a pianist, and the enormous success of this led to one of the most successful concert pianist careers in early history. He moved to London in 1776, where he performed as a soloist and directed concerts from the keyboard. By 1780 he was considered by many as one of the great keyboard virtuosos of the world, which won him the enmity of Mozart, who described him in a letter to his father Leopold as a charlatan, a mere technician without a scrap of musical talent. A famous piano contest with Mozart in Vienna was declared a draw because of the outstanding qualities of both performers. A successful European tour brought him as far as St. Petersburg.

Clementi led a very productive life on London for the next 20 years, playing, conducting, teaching (his pupils include J. B. Cramer and John Field), and eventually manufacturing pianos until his factory burnt down in 1807. He then went into publishing, and managed to obtain the exclusive rights to all the works by his admirer Ludwig van Beethoven. In 1810 he quit his performing career in favour of composing and piano manufacturing. He died in 1832 in Evesham, having amassed a considerable fortune, and was buried in Westminster Abbey. He had been married three times.

Mozart's derisive comments may have been partly responsible for Clementi's long neglect. It is now recognized however that, in addition to all his other talents, he was a fine composer, and a key figure in the development of piano building, piano technique, and the sonata form. His works include vocal works and chamber works, a number of symphonies that are fast gaining popularity, a piano concerto, and a large body of piano compositions.

Central to Clementi's piano oeuvre are the over hundred piano sonatas and sonatinas, of which the one called Didone abbandonata is deservedly the most popular. The easier sonatinas are known by every piano student, but the advanced sonatas are often more difficult to play than Mozart's sonatas. Equally important are the three volumes of studies called Gradus ad Parnassum (fondly persiflaged by Debussy in his Children's Corner), and his pedagogical book Introduction to the Art of Playing the Piano Forte.