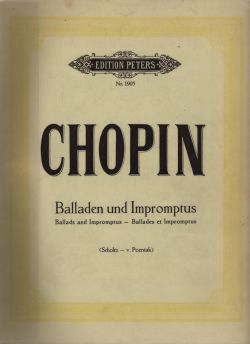 Chopin's Ballades represents the highest art of music and are undoubtedly among his most important works. I remember an old book I read where the writers friend during a meeting with fellow lovers of Chopin's music spontaneously called out "All Beethoven's Sonatas for a Chopin Ballade". That should say it all. Chopin's first Ballade took him a great effort to produce and occupied him, on and off, for two years. In his Ballades, control and deployment of passion, in their combination of immediacy and inner logic, they show us not once but repeatedly how art derives order from chaos.