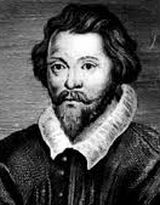 William Byrd, English madrigalist and composer, was born in 1543 in Lincolnshire in England, and died in 1623 in Essex of unknown causes. This 'Father of Musicke' is considered the greatest of the Virginal composers, and has arguably had more influence on the development of English music than any other composer. He worked together with the famous polyphonist Thomas Tallis, with whom he shared the post of organist to the Chapel Royal, and with whom he prepared and published a set of Latin motets.

Byrd was a prolific composer, who tried his hand at most every type of composition known at the time, and many of his works still remain in manuscript. Being a Catholic, he produced a large body of Latin church music, among which we count three masses for three, four, and five voices respectively.

He also wrote a large number of pieces for the virginal, the keyboard instrument which was current in England at the time. Many of these works are contained in the Fitzwilliam Virginal Book. They range from simple dance-tunes, such as the then-popular Pavane and Gaillard, to complex contrapuntal works.