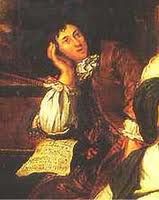 Dietrich Buxtehude, Danish composer and organist, is considered the prime exponent of the North German baroque school. He was born in 1637 in Oldesloe near the Danish-German border, but grew up in Helsingör in Denmark where the family moved when his father Johannes Buxtehude acquired the post of organist to the St. Olaus church. Dietrich was taught music by his father, but may have studied in Kopenhagen as well. In 1657 he succeeded his father as organist of the Maria Church in Helsingborg, Sweden, and in 1660 was appointed organist of the German Marienkirche in Helsingör.

In 1668 Buxtehude became organist and administrator at the Marienkirche in Lübeck, Germany, and in accordance with a long standing tradition in organist families, he married Anna Margarethe Thunder, the daughter of his predecessor Franz Thunder. Following the same custom, he stayed in Lübeck for the rest of his life, and tried in vain to marry off his own daughter to a number of possible successors (among which we count Händel, Matheson, and possibly Johann Sebastian Bach). At the Marienkirche, Buxtehude offered public concerts known as Abendmusiken, consisting of organ music, oratoria and other large-scale vocal works. The huge popularity of these concerts, given in the Advent weeks before Christmas, ensured his success as a composer and organist. He died in Lübeck in 1707. Buxtehude is sometimes considered a German composer, which is inaccurate, as despite working over half his life in Germany, he never forgot his Danish roots.

Buxtehude composed a large oeuvre, mainly consisting of vocal works in the style of Heinrich Schütz, keyboard works in the style of Frescobaldi and Froberger, trio sonatas, and organ works of both secular and sacred type. The organ works in particular were a profound influence on Johann Sebastian Bach, who allegedly walked all the way from Arnstadt to Lübeck (a distance of over 300 kilometres) to hear Buxtehude play, and without permission of the church authorities extended his granted four weeks of leave to four months, presumably to study with Buxtehude. It would be fair to say that Bach's great organ works would not be the same without the influence of Buxtehude.