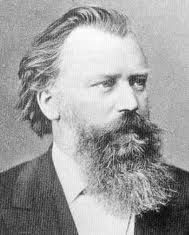 Johannes Brahms was born in Hamburg. His father, Johann Jakob Brahms, came to Hamburg from Schleswig-Holstein seeking a career as a town musician. He was proficient on several instruments but found employment mostly as a horn player and double bassist.

He married Christiane Nissen, a seamstress, who was considerably older than he was. They lived in the poor Gängeviertel district of the city, near the docks.

Johann Jakob gave his son his first musical training. He studied piano from the age of 3 and showed early promise on the piano (his younger brother Fritz also became a pianist) and helped to supplement the rather meager family income by playing the piano in restaurants and theaters, as well as by teaching. It is a long-told tale that Brahms was forced in his early teens to play the piano in bars that doubled as brothels; recently Brahms scholar Kurt Hoffman has suggested that this legend is false. Since Brahms himself clearly originated the story, however, some have questioned Hoffman's theory.

For a time, Brahms also learned the cello, although his progress was cut short when his teacher absconded with Brahms's instrument. His piano teachers were first Otto Cossel and then Eduard Marxsen, who had studied in Vienna with Ignaz Seyfried (a pupil of Mozart) and Carl von Bocklet (a close friend of Schubert). The young Brahms gave a few public concerts in Hamburg, and though he did not become well known as a pianist he made some concert tours in the 1850s and 60s and in later life frequently participated in the performance of his own works, whether as soloist, accompanist, or participant in chamber music. Notably he gave the premieres of both his Piano Concerto No. 1 in 1859 and his Piano Concerto No. 2 in 1881. In his early teens he began to conduct choirs and eventually became an efficient choral and orchestral conductor.

He began to compose quite early in life (we know of a piano sonata he played or improvised at the age of 11), but his efforts did not receive much attention until he went on a concert tour as accompanist to the Hungarian violinist Eduard Reményi in April-May 1853. On this tour he met Joseph Joachim at Hanover, and went on to the Court of Weimar where he met Franz Liszt, Peter Cornelius and Joachim Raff. According to several witnesses of Brahms's meeting with Liszt (at which Liszt performed Brahms's own op.4 Scherzo at sight), Reményi was offended by Brahms' failure to praise Liszt's Sonata in B minor wholeheartedly (Brahms fell asleep during a performance of the recently-composed work), and they parted company shortly afterwards, although it was not clear as to whether Liszt felt offended or otherwise.

Joachim had given Brahms a letter of introduction to Robert Schumann, and Brahms walked to Düsseldorf, arriving on 30 September and being welcomed into the Schumann family. Schumann, amazed by the 20-year-old's talent, published an article 'Neue Bahnen' (New Paths) in the journal Neue Zeitschrift fur Musik alerting the public to the young man whom he claimed was 'destined to give ideal expression to the times'. This pronouncement was received with some scepticism outside Schumann's immediate circle, and may have increased the naturally self-critical Brahms's need to perfect his works and technique. While he was in Düsseldorf Brahms participated with Schumann and Albert Dietrich in writing the jointly-composed 'F-A-E' Sonata for Joachim. He became very attached to Schumann's wife, the composer and pianist Clara, 14 years his senior, with whom he would carry on a lifelong, emotionally passionate, but perhaps only platonic, relationship. Brahms never married, despite strong feelings for several women and despite entering into an engagement, soon broken off, with Agathe von Siebold in Göttingen in 1859. After Schumann's attempted suicide and subsequent incarceration in a mental sanatorium near Bonn in February 1854, Brahms was the main go-between between Clara and her husband, and found himself virtually head of the household.

After Schumanns death at the sanatorium in 1856 Brahms divided his time between Hamburg, where he formed and conducted a ladies choir, and the principality of Detmold, where he was court music-teacher and conductor. He first visited Vienna in 1862, staying there over the winter, and in 1863 was appointed conductor of the Vienna Singakademie. Though he resigned the position the following year he based himself increasingly in Vienna and soon made his home there, though he toyed with the idea of taking up conducting posts elsewhere. From 1872 to 1875 he was Director of the concerts of the Vienna Gesellschaft der Musikfreunde; afterwards he accepted no formal position. He refused an Honorary Doctorate of Music from University of Cambridge in 1877 (he was afraid of being lionized in England, where his music was already very popular) but accepted one from the University of Breslau in 1879, composing the Academic Festival Overture in response.

He had been composing steadily throughout the 1850s and 60s, but his music had evoked divided critical responses and the First Piano Concerto had been badly received in some of its early performances. His works were labelled old-fashioned by the 'New German School' whose principal figures included Liszt and Richard Wagner. Brahms in fact admired some of Wagner's music and admired Liszt as a great pianist, but in 1860 he attempted to organize a public protest against some of the wilder excesses of their music. His manifesto, which was published prematurely with only three supporting signatures, was a ludicrous failure and he never engaged in public polemics again. It was the premiere of Ein deutsches Requiem, his largest choral work, in Bremen in 1868 that confirmed Brahms's European reputation and led many to accept that he had fulfilled Schumanns prophecy. This may have given him the confidence finally to complete a number of works that had been wrestled with over many years, such as the cantata Rinaldo, his first String Quartet, Third Piano Quartet and, most notably, his First Symphony; this appeared in 1876, though it had been begun (and a version of the first movement seen by some of his friends) in the early 1860s. The other three symphonies then followed in fairly rapid succession (1877, 1883, and 1885). From 1881 he was able to try out his new orchestral works with the court orchestra of the Duke of Meiningen, whose conductor was Hans von Bulow.

Brahms frequently traveled, for both business (concert tours) and pleasure. From 1878 onwards he often visited Italy in the springtime, and usually sought out a pleasant rural location in which to compose during the summer. He was a great walker and especially enjoyed spending time in the open air, where he felt that he could think more clearly.

In 1890, the 57-year-old Brahms resolved to give up composing. However, as it turned out, he was unable to abide by his decision, and in the years before his death he produced a number of acknowledged masterpieces. His admiration for Richard Műhlfeld, clarinettist with the Meiningen orchestra, caused him to compose the clarinet quintet Op.115 (1891), clarinet trio Op.114 (1891) and the two clarinet sonatas Op. 120 (1894). He also wrote several cycles of piano pieces, Opp.116-119 and the Four Serious Songs (Vier ernste Gesänge) Op. 121 (1896).

While completing the Op. 121 songs Brahms fell ill of cancer (sources differ on whether this was of the liver or pancreas). His condition gradually worsened and he died on April 3, 1897. Brahms is buried in the Zentralfriedhof in Vienna.

Although Brahms may be often regarded as one of the last bastions of the Romantic Period, he was not a mainstream Romantic but rather maintained a Classical sense of form and logic within his works in contrast to the opulence and excesses of many of his contemporaries. Thus many admirers--though not necessarily Brahms himself---saw him as the champion of traditional forms and "pure music," as opposed to the New German embrace of program music. Alongside Anton Bruckner, Brahms was perhaps the major practitioner of the symphony during the latter half of the 19th century; his symphonies helped revive a virtually moribund genre and pave the way for others such as Gustav Mahler and Jean Sibelius. Though he was viewed as diametrically opposed to Wagner during his lifetime, it is incorrect to characterize Brahms as a reactionary. His point of view looked both backward and forward; his output was often bold in harmony and expression, prompting Arnold Schoenberg to write his important essay entitled "Brahms the Progressive" which paved the way for the revaluation of Brahms's reputation in the 20th century. Only in recent decades have scholars begun to examine Brahms's remarkably original rhythmic conceptions, which include 5- and 7-beat meters.

It is (perhaps) significant that Brahms himself had considered giving up composition at a time when all notions of tonality were being stretched to their limit and that further expansion would seemingly only result in the rules of tonality being broken altogether. It should be noted, however, that he offered substantial encouragement to Schoenberg's teacher Alexander Zemlinsky and was apparently much impressed by two movements of Schoenberg's early D major Quartet which Zemlinsky showed him.