Beethoven's first music teacher was his father, a musician in the Electoral court at Bonn who was apparently a harsh and unpredictable instructor. Johann would often come home from a bar in the middle of the night and pull young Ludwig out of bed to play for him and his friend. Beethoven's talent was recognized at a very early age and his first important teacher was Christian Gottlob Neefe. In 1787 young Beethoven traveled to Vienna for the first time, where he may have met and played for Mozart. There exist disputable information that Mozart himself commented upon hearing young Ludwig play; "That boy's music will force the world to listen to him". He had to return home because his mother was dying of tuberculosis. Beethoven's mother died when he was 16, and for several years he was responsible for raising his two younger brothers because of his father's worsening alcoholism. He took very much responsibility for his younger siblings and even went to his father's employer and demanded that half of the salary was to be paid out to him only. His father went furious but the employer took young Ludwig's party, proving the strength and courage of the boy.

Beethoven moved to Vienna in 1792, where he studied for a time with Joseph Haydn in lieu of Wolfgang Amadeus Mozart, who had died the previous year. He received additional instruction from Johan Georg Albrechtsburger (Vienna's preeminent counterpoint instructor) and Antonio Salieri. Beethoven immediately established a reputation as a piano virtuoso. His first works with opus numbers, the three piano trios, appeared in 1795. He settled into the career pattern he would follow for the remainder of his life: rather than working for the church or a noble court (as most composers before him had done), he supported himself through a combination of annual stipends or single gifts from members of the aristocracy, income from public performances, concerts, and lessons, and sales of his works.

In the Early period, he is seen as emulating his great predecessors Haydn and Mozart while concurrently exploring new directions and gradually expanding the scope and ambition of his work. Some important pieces from the Early period are the first and second symphonies, the first six string quartets, the first two piano concertos, and the first twenty piano sonatas, including the famous Pathétique and Moonlight.

The Middle period began shortly after Beethoven's personal crisis centering around deafness. The period is noted for large-scale works expressing heroism and struggle; these include many of the most famous works of classical music. Middle period works include six symphonies (Nos. 38), the last three piano concertos, triple concerto and his only violin concerto, five string quartets (Nos. 711), the next seven 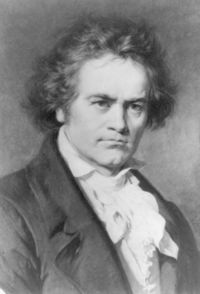 piano sonatas including the Waldstein, and Appassionata, and his only opera, Fidelio.

Beethoven's Late period began around 1816 and lasted until Beethoven's death in 1827. The Late works are greatly admired for and characterized by their intellectual depth, intense and highly personal expression, and experimentation with forms (for example, the Quartet in C Sharp Minor has seven movements, while most famously his Ninth Symphony adds choral forces to the orchestra in the last movement). This period includes the Missa Solemnis, the last five string quartets and the last five piano sonatas.

Considering the depth and extent of Beethoven's artistic explorations, as well as the composer's success in making himself comprehensible to the widest possible audience, the Austrian-born British musician and writer Hans Keller pronounced Beethoven "humanity's greatest mind altogether".

Beethoven's personal life was troubled. Around age 28, he started to become deaf, which led him to contemplate suicide (see the 1802 Heiligenstadt Testament). He was attracted to unattainable (married or aristocratic) women but he never married. His only uncontested love affair with a known woman began in 1805 with Josephine von Brunswick; most scholars think it ended by 1807 because she could not marry a commoner without losing her children. In 1812 he wrote a long love letter to a woman only identified therein as the "Immortal Beloved." Several candidates have been suggested, but none has won universal support. Some scholars believe his period of low productivity from about 1812 to 1816 was caused by depression resulting from Beethoven's realization that he would never marry. He didn't publish anything during this period, but he released an enormous amount of material in 1816.

Beethoven quarrelled, often bitterly, with his relatives and others (including a painful and public custody battle over his nephew Karl); he frequently treated other people badly. He moved often and had strange personal habits, such as wearing dirty clothing even as he washed compulsively. Nonetheless, he had a close and devoted circle of friends his entire life.

Many listeners perceive an echo of Beethoven's life in his music, which often depicts struggle followed by triumph. This description is often applied to Beethoven's creation of masterpieces in the face of his severe personal difficulties. His last musical sketches belong to the composition of a string quintet in C Major [1]. 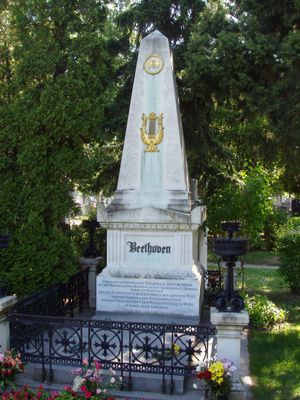 Beethoven was often in poor health. According to one of his letters, his abdominal problems began while he was still in Bonn and thus can be dated to before 1792. In 1826 his health took a drastic turn for the worse. The autopsy report indicates serious problems with his liver, gall bladder, spleen, and pancreas. There is no general agreement on the exact cause of death. Modern research on a lock of Beethoven's hair cut from his head the day after he died and a piece of his skull taken from his grave in 1863, both now at the Beethoven Center in San Jose, California [2], show that lead poisoning could well have contributed to his ill-health and ultimately to his death. The source (or sources) of the lead poisoning is unknown, but may have been fish, lead compounds used to sweeten wines, pewter drinking vessels or long sessions in mineral baths. It is unlikely that lead poisoning was the cause of his deafness, which several researchers think was caused by Paget's disease, cochlear otosclerosis, or an autoimmune disorder such as systemic lupus erythematosus, although recent studies have shown that some lead poison victims have suffered from hearing loss as well. The hair analyses did not detect mercury, which is consistent with the view that Beethoven did not have syphilis (syphilis was treated with mercury compounds at the time). The absence of drug metabolites suggests Beethoven avoided opiate painkillers.

Beethoven died on 26 March 1827, after a long illness, in the midst of a fierce thunderstorm, and legend has it that the dying man shook his fists in defiance of the heavens. He was buried in the Währinger cemetery. Twenty months later, the body of Franz Schubert was buried next to Beethoven's. In 1888, both Schubert's and Beethoven's graves were moved to the Zentralfriedhof (Central Cemetery), where they can now be found next to those of Johann Strauss I and Johannes Brahms.

For more information about Beethoven, read the book "Beethoven: the Man and the Artist" present at the "Publications Menu" at this site.