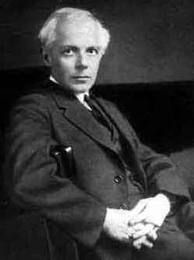 Béla Bartók, Hungarian composer, was born in 1881 in the small provincial town of Nagyszentmiklós (which, after World War I, became Sânnicolau Mare in Romania). Both his parents were musically educated and he received his first piano lessons from his mother. Being a child prodigy, he played the piano at age four, and produced his first composition at age nine. From 1894 he studied in Bratislava with the conductor Laszlo Erkel, and in 1899 he entered the Budapest Royal Academy of Music where he studied piano under István Thoman (himself a pupil of Liszt) and composition under János Koessler.

In 1902, a meeting with Richard Strauss at at the Budapest premiere of Also sprach Zarathustra, sparked off his composing career, and his grandiose and nationalistic tone poem Kossuth was premiered a year later. By this time, Bartók was also a renowned piano virtuoso, traveling abroad performing music of Liszt and other romantic composers. Another landmark in his career was his befriending of fellow composer Zoltan Kodály, with whom he traveled the outskirts of pre-war Hungary in 1906, systematically collecting and recording folk music. Bartók's fascination with native Hungarian folk music, as opposed to the gypsy-derived music which until then passed for it, was to permeate much of his music from now on, and is always evident in many of his best works.

Bartók became professor of piano at the the Budapest Royal Academy of Music in 1907, which post enabled him to abandon the life of an itinerant virtuoso for composing and more collecting of folk songs (this time as far as Turkey and North Africa). In 1919 he married his pupil Márta Ziegler, whom he divorced again in 1923 and soon after he married his piano student Ditta Pásztory with whom he later on toured and gave concerts on two pianos. He was frustrated by the fact that his music, which had by now taken new and radical turns, was not at all being appreciated in Hungary. However, he gained considerable appreciation abroad, and thanks to ground-breaking works like the Miraculous Mandarin was considered as one of the foremost contemporary composers.

The outbreak of World War II and the rise of Nazi power in Hungary forced Bartók to flee his beloved home country and emigrate to the United States. His frail health and financial troubles, being an unknown composer in a strange country, made this an unhappy time. In 1945, just when he was getting recognition as one of the major European composers, he died of leukemia and was buried in New York. After the fall of Hungarian communism in 1988, his remains were transferred to Budapest to be given a full state funeral.

Major influences on Bartók's style were Liszt, Brahms, Richard Strauss, Debussy, Stravinsky, and of course folk music, and all these were blended into a unique and highly personal style full of melodic fertility and rhythmical vitality. Bartók can be counted as one of the most versatile and original composers of all times, and the list of masterpieces is long. The opera Bluebeard's Castle (1911), the ballet The Wooden Prince (1914-16), the controversial pantomime 'The Miraculous Mandarin' (1919, not performed until 1926), three piano concertos, two violin concertos, a concerto for viola and orchestra (left only in sketches, later completed and orchestrated by his pupil Tibor Serly), the Dance Suite (1922), the Cantata Profana (1930), the Music for Strings, Precussion and Celesta (1936), and his undisputed masterpiece, the Concerto for Orchestra (1943). Special mention deserve his six String Quartets which are regarded as the best works in this genre since those of Beethoven.

Lastly, there is Bartók's extended and unique volume of piano works, ranging from simple educational works (For Children, Mikrokosmos, Ten Easy Pieces) via idiomatic folk song settings (the best of which are the Improvisations over Hungarian Folk Tunes, op. 20), to highly individual and abstract works like the Allegro Barbaro, Out Doors suite, the Sonata (1926) and the Sonata for two pianos and percussion (1937).
recordings