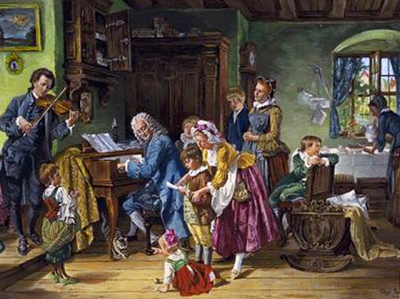 "Bach with His Family at Morning Devotion", by Toby Edward Rosenthal (1870)


In the eighteenth century, copying music was a very important part of any musicians life. Thats why in the years of 1722 and 1725 Johann Sebastian Bach gave his second wife, Anna Magdalena, two notebooks: the first one entitled Clavier-Büchlein vor Anna Magdalena Bach in ANNO 1722, or Notebook for Anna Magdalena Bach, year 1722; and the second one, the 1725 notebook, commonly referred to as the Anna Magdalena Notebook.

The 1722 notebook contains mainly pieces by J.S. Bach, such as fragments of the French Suites, an air with variations and a short organ piece. Unfortunately, only 25 unbound pages of this first notebook have reached us, what amounts to about a third of its estimated original size.

The better known 1725 notebook, more richly decorated and better bound than the first one, did reach this day in much better condition. Its fine binding work and gilt edging, strongly suggests it was a gift from J. S. Bach to his wife to celebrate a very special occasion: possibly, either her 24th birthday on September 22nd, 1725, or their wedding anniversary on December 3rd.

Anna Magdalena was very much musically inclined and was employed as a singer at the time of their marriage. In Bach's own words, she could sing "decent soprano".

Bach copied the first two pieces on the notebook, as part of the gift for his wife: the very first one is the partita BWV 827 in A minor, or AM, which are Anna Magdalenas initials. The second piece is the partita in E minor, BWV 830.

The notebook also contains several dances, arias, chorales and other pieces of music by several composers, including Carl Phillip Emmanuel Bach, Christian Petzold, François Couperin, Georg Bohm and other musician friends of the Bach family. Most entries were copied by Anna Magdalena herself, but the presence of the handwritings of Johan Sebastian, Carl Phillip Emmanual and Johann Christian Bach indicates that maintaining the notebook was a family effort.

Most of the pieces are technically quite accessible, a fact which denotes an important didactical value to them. Quite possibly, these pieces were not only for musical enjoyment of the Bach family, but also for the musical education of its younger members. Bach probably knew that initiation to keyboard instrument playing would take something easier and simpler than his Inventions and Sinfonias, especially for children.

In addition to that, Anna Magdalena was known to have organized several musical gatherings at the Bach household, where visitors were encouraged to perform and also to compose new pieces for the Notebook, which were promptly copied to it.

It has recently been suggested by researchers that Anna Magdalena may have composed some pieces which bore her husbands name, namely the six cello suites, BWV 1007-1012, and the aria from the Goldberg Variations, BWV 988, which was entered into the 1725 notebook. This claim is not universally accepted by all scholars, though.

Johann Sebastian and Anna Magdalena had a happy marriage to which their common interest in music certainly contributed. Unfortunately, after Bachs death in 1850, their sons parted different ways due to disagreements, and Anna Magdalena became increasingly dependent on charity and government handouts. She died in 1860 and was buried in a paupers grave.

The complete listing of the pieces which have reached us in the 1722 and in the 1725 notebook are below:

1. Five keyboard suites. The first three are fragments of the pieces that are now known as the first three French Suites, BWV 812814. The next two are complete suites, French Suites Nos. 4 and 5, BWV 815816. The minuets of suites 2 and 3 are separated from the rest of their respective suites and were most probably added at a later date by Anna Magdalena Bach (they are almost certainly in her hand), some time before 1725.
2. Fantasia pro organo, unfinished, BWV 573. A short organ piece, 12 complete bars and the beginning notes of the 13th bar.
3. Air with variations in C minor, unfinished, BWV 991. The first 10 bars feature coherent two-part writing, but the remaining 35 bars only have one voice written out.
4. Jesus, meine Zuversicht, chorale prelude, BWV 728. A brief (9 bars) piece in three voices, features two sections with repeats for each.
5. Minuet in G major, BWV 841 (not to be confused with Petzold's Minuet in G Major in the 1725 notebook). A short dance with simplistic two-part writing and two sections with repeats for each.