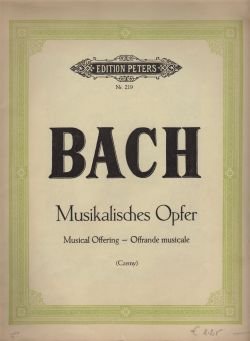 Bach composed his Musikalisches Opfer (Musical Offering) after a visit to king Frederick the Great (Friedrich der Grosse) of Prussia in 1747. This visit is one of the few fully documented events in Bach's career. King Frederick was a skilled amateur flautist and composer, and he had invited Bach for a private concert appearance at the Prussian court in Potsdam. During the concert, he provided Bach with a theme (hereafter referred to as the Royal Theme) to improvise a fugue on. Despite the 'difficulty' of the theme (which is much longer than usual for a fugue theme), Bach rose splendidly to the occasion, and astonished the king with his brilliant improvisations.

Bach however felt that he had not by large fully realized the potential of the Royal Theme, and announced that he would do a proper job with it. Several months later he published the Musical Offering at his own expense. The set consists of three fugues, a trio sonata, and a number of canons, all based on the Royal Theme. Bach's ingenious dedication to Fredrick the Great reads

Regis Iussu Cantio Et Reliqua Canonica Arte Resoluta
("a theme and other things worked out in canon by the King's command") The begin letters of this dedication mark out the word Ricercar, the name Bach gave to two of the fugues, one for 3 voices and one for 6 voices.

Bach sent a copy of the printed score, with a dedication in German, to the king. It is not known whether or not the king, who was a man of simple musical tastes and could barely read German, approved of Bach's masterfully artful adaptations of his theme. In any case, the Musical Offering stands, together with the Art of Fugue, as the foremost example of Bach's contrapuntal skills.