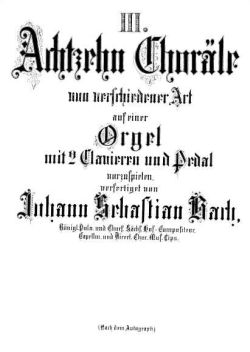 The collection of 18 Organ Chorales BWV 651-668 is also known as the Leipziger Chorales. Most of them were composed between 1708 and 1719 when Bach was employed as Kapellmeister in Weimar. The last two chorales are expanded versions of preludes from the Orgelbüchlein which was also composed in the Weimar years. The last chorale, Vor Deinen Thron tret Ich, BWV 668, was also published in the first 1751 edition of Die Kunst der Fuge, under its alternative name Wenn wir in Höchsten Nöten, as a makeweight for the incomplete fugue.


This richly varied set is organized in groups of different settings of the same Lutheran chorale. For example there are two settings of Komm, Heiliger Geist, three of Allein Gott in der Höh' sei Ehr, and three of the famous Nun komm' der Heiden Heiland (which is perhaps more famous in the piano transcription by Ferrucio Busoni). Some chorales are virtuoso showpieces, others are simple improvisational preludes, and some are trios, anticipating the Trio Sonatas in their use of three fully independent parts.

Together with the Clavier Ubung part III, the Orgelbüchlein, and the Schübler Chorales, the Leipziger Chorales form the bulk of Bach's chorale-based organ compositions.