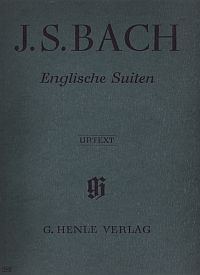 The English Suites (BWV 806811) refer to a set of six suites written by the German composer Johann Sebastian Bach for harpsichord and generally thought to be the earliest of Bach's 18 suites for keyboard, the others being the 6 French Suites (BWV 812817) and the 6 Partitas (BWV 825830).

Originally, their date of composition was thought to have been between 1718 and 1720, but more recent research suggests that they are likely to have been composited earlier, around 1715, while the composer was living in Weimar. Bach was obliged to write a new cantata every week during his time at the Weimar court, and the English Suites he composed at this time express Bach's longing for new, instrumental music and held therefore a very special place in Bach's life and work. Later in Köthen and Leipzig he worked on a full-time basis with professional orchestras, providing him an ideal context in which to create orchestral and purely instrumental compositions.

Like the French Suites, the use of the term English to describe the Suites was a later addition. The name is thought to date back to a claim made by the nineteenth-century Bach biographer Johann Nikolaus Forkel that they were composed for an English nobleman, although no evidence has emerged to substantiate this claim. There are several striking characteristics about the English Suites. Bach includes a highly virtuosic prelude for each, in a departure from the prevailing tradition dictating a strict progression of the dance movements (Allemande, Courante, Sarabande and Gigue). By comparison, the later French Suites and Partitas are less strict in form. The Sarabande and Gigue movements in each of the English Suites is never separated by more than a single (twinned) Menuet or Menuet-like movement. Finally, the English Suites are predominantly in the minor key.


BWV 806 - English Suite No.1 in A major
Complete recording by Breemer, C.

BWV 807 - English Suite No.2 in A minor
Complete recording by Hillmann, J..