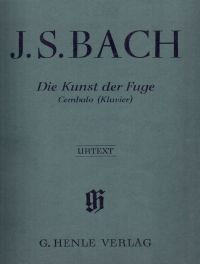 "Die Kunst der Fuge", BWV 1080, is an unfinished work by Johann Sebastian Bach, composed in 1748-1750 and published in 1751, a year after his death. In writing the fourteen fugues and four canons contained in this work Bach demonstrated his complete mastery of the most complex musical counterpoint, achieving particularly elaborate and ingenious combinations of relatively simple themes in pieces which attain the highest musicality.

When Bach died in 1750, almost blind, he was still working on the mighty triple fugue which is now known as Contrapunctus 14. As legend has it, he was dictating the notes to his pupil and son-in-law Johann Christoph Altnickol. The fugue breaks off, touchingly, shortly after introducing the motto theme B-A-C-H. At that location in the autograph manuscript, Carl Philipp Emmanuel wrote a comment stating that 'the composer had died over this fugue, where the name BACH is brought in as a countersubject'. When Bach's sons submitted the work for publication, they apologised for the unfinished fugue and substituted the organ chorale "Wenn wir in höchsten Nöten sein" in place of it. Later editions removed this irrelevant chorale and gave the unfinished fugue its rightful place as the technical and emotional culmination of the cycle.

The recordings presented here use the Henle Urtext edtion, a revised edition by the renowned Bach scholar Davitt Moroney, who also completed the unfinished fugue and recorded a benchmark performance of Die Kunst der Fuge on the harpsichord. The order of the fugues and canons, which has long been unclear, follows the ordering from this edition.