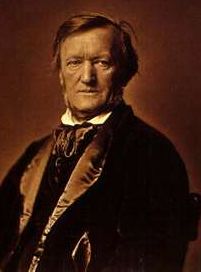 Wilhelm Richard Wagner was an influential German composer, conductor, music theorist, and essayist, primarily known for his operas. His compositions, particularly those of his later period, are notable for their contrapuntal texture, rich chromaticism, harmonies and orchestration, and elaborate use of leitmotifs: themes associated with specific characters, locales, or plot elements. Wagner's chromatic musical language prefigured later developments in European classical music, including extreme chromaticism and atonality. He transformed musical thought through his idea of Gesamtkunstwerk ("total artwork"), epitomized by his monumental four-opera cycle Der Ring des Nibelungen (1876). His concept of leitmotif and integrated musical expression was also a strong influence on many 20th century film scores. Wagner was and remains a controversial figure, both for his musical and dramatic innovations, and for his anti-semitic and political opinions.